In the past I have made apple wine several times. It is a very nice base and you can combine apples with other kinds of fruits to make it more interesting. Most of the times I used apple juice from the supermarket and it always works fine. It usually needs a little bit more acid and citric acid is my favorite, but if you like you can add some lemon juice instead.

I also made apple wine from fresh apples that I got from a friend. Since it is a bit hard to get the juice out of the apples without a tool like this I didn’t make it often.

This year I was happy to make it. With my improved juicer it was fun to get the juice. Since it was not enough I also bought 4 kg apples from the supermarket.

I made a measurement of the sugar and added some to reach about 11% alcohol. I knew that the apples from my friend are very acidic and therefore I decided not to make a measurement at all. I don’t like to use chemicals to get some acid out of the wine. If it would prove to be too sour I could add some sugar just before drinking or I could blend it with a wine that is not sour. We will decide later.

So I put the apple juice and the sugar in a bucket, rehydrated the yeast and also added it. To my big surprise the fermentation sort of started, but stopped very quickly. This has never happened to me before!

There it is again; The question that I asked myself many times “What happened?”

I have no doubt about the yeast, and the apples from my friend. I have used them before and I know that yeast absolutely love apples. The only new thing were the supermarket apples. It did not take a long time before I realized that these apples are treated with some kind of poison to protect them from bugs.

So that is it! The yeast was poisoned! I could not believe that there was still enough poison in these apples to stop the fermentation. As a child we were always told “Snack healthy, eat an apple.” (Poorly translated from Dutch) I seriously have my doubts about how healthy apples really are.

Since I had 15 liters of juice I did not want to give up immediately. I decided to make a very big yeast starter to see if I could get the fermentation going. So I bought a big bottle of apple juice and made a starter. Now I had a big, big army of yeast on my side. So I added 1,5 liter very active starter to the bucket. It started to ferment but I was not happy with it. Fermentation became slow and eventually stopped again. I could not believe it. How much poison is in these apples?

So I decided to follow the advice given in some books. The procedure is as follows:

Since I never tried it before I was not so sure it would work. The juice already killed an enormous amount of yeast before so why should it not kill again?

But I still wanted to try. Otherwise I had to throw away a lot of work. So I bought another bottle of apple juice and made another starter. This time I used champagne yeast. I know that it is recommended for restarting fermentations also in beers.

I followed the procedure but in the beginning I added less "poisoned juice" just to let the yeast get used to it. (Again I pretend that yeast act like humans.) The fermentation was still slow and I did not believe it would work. I thought that the yeast would be killed again when I would add more and more of the poisoned juice. 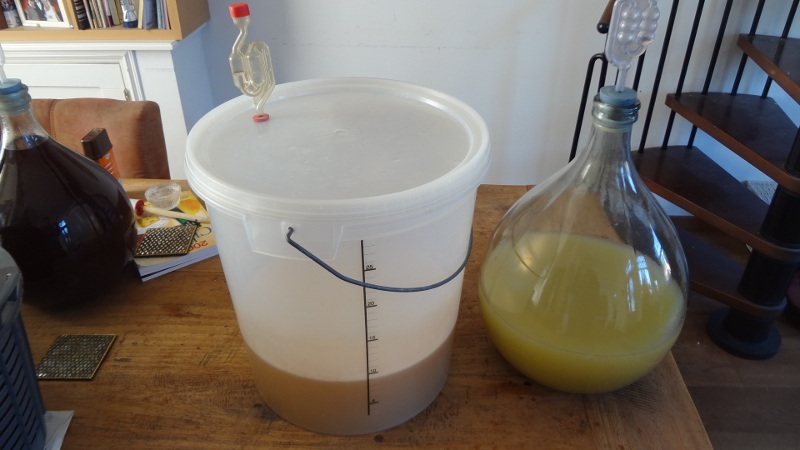 But I slowly increased the amount of juice and also shook the bucket several times to get air mixed in. Oxygen is important for yeast growth and they could use all the help I can give.

And to my surprise the fermentation became faster. More and more bubbles through the air lock.

Now all the juice is in the bucket and fermentation continues. No bad smells. Things are looking good.

I celebrate the victory of my champagne army!

Why the fermentation of these apples was so troublesome I don't know. Saying that apples are poison without proper knowledge may be considered a little dramatic.